After calling the branch office of the FBI, yep I do things like that, to see if I could plan a field trip there, I decided to take their advice and plan a field trip to the Federal Reserve Bank instead. The FBI has a local outreach community and though it sounded nice to have a special agent come and talk to our group, the outreach coordinator felt it was more beneficial to see a federal entity in action. Also, because my focus was aimed toward my highschoolers this would add to their credit for economics.

I have to admit at first that visiting the Federal Reserve Bank hadn't even crossed my mind and I wasn't even sure it sounded so appealing. I would have to decide first where I stood on monetary policy before I could ask my teens.  Economics, beyond budgeting was not my favorite subject in school either. 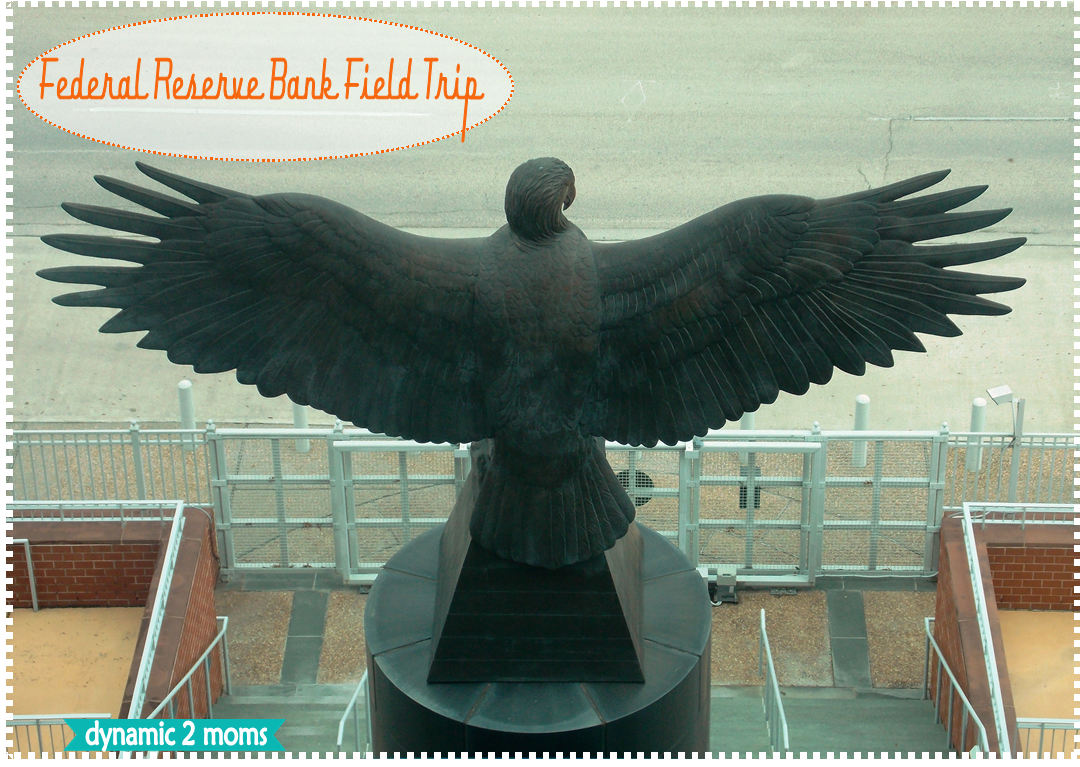 However, this field trip did not disappoint and stacked up high against others we have taken. You see those gates in front of the eagle? Nobody can get in unless the security guard lets you in. Because we are talking literally about 9 billion dollars that could be sitting in the bank at one time, we had to pass security checks much like the ones at airport screenings.

Did I mention our seniors who just turned 18 enjoyed savoring their new found adulthood by show off their driver's license for identification?

Too, we were told ahead of time that there was no photography in a lot of places because it is the actual operations of the money handling. I managed to get as many pictures as were allowed. 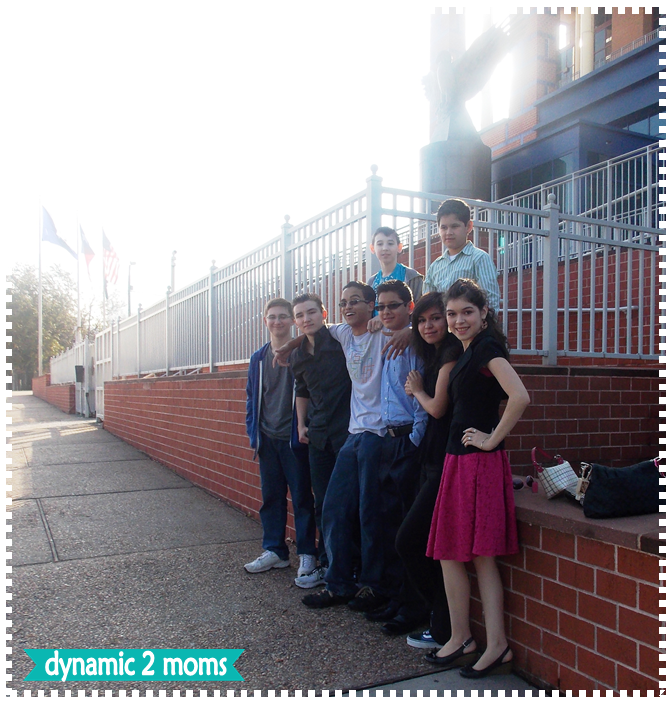 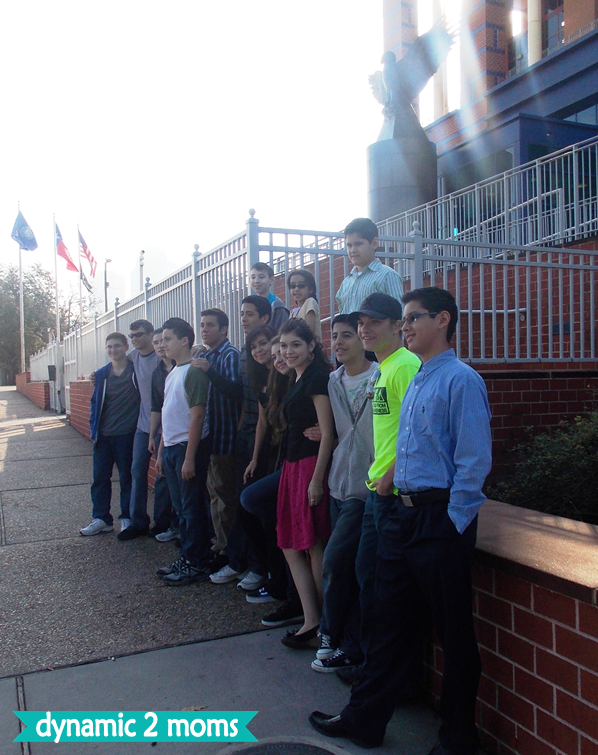 So we snapped a few pictures early morning in front of the secured building before we went inside to find out exactly what is the function of the Federal Reserve Bank. 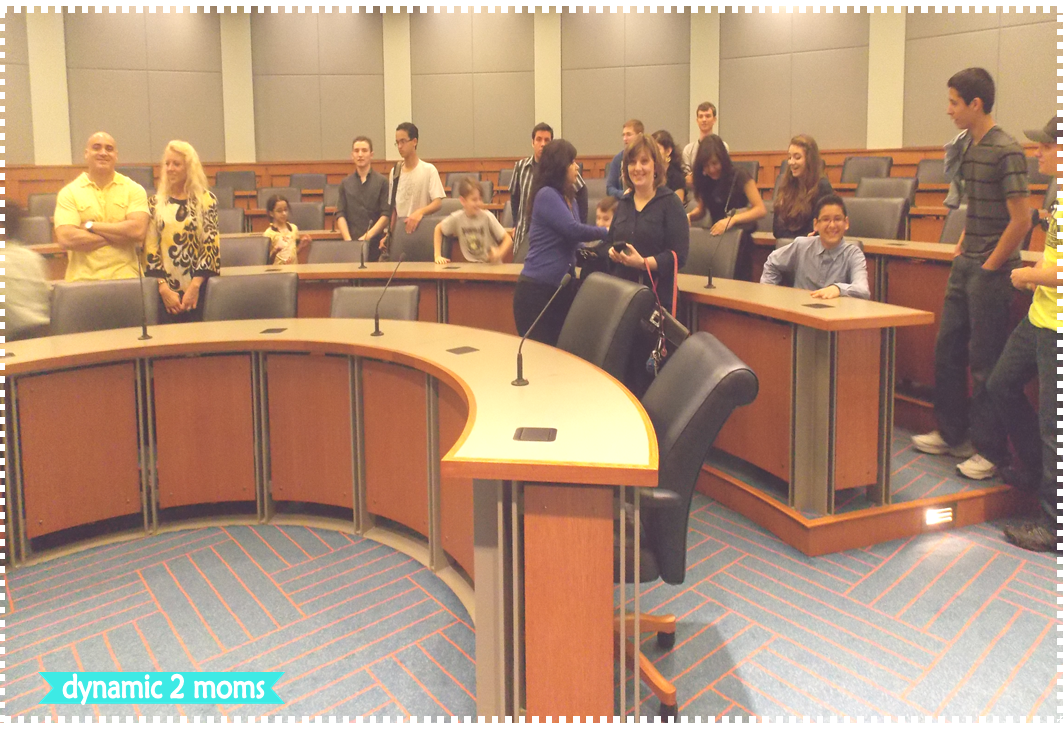 The first floor had the money separating machines. We learned how money was shredded after it no longer was able to be read by machines and how other money was counted and stored on robot pallets. Then, we went upstairs to this room. By the way, did you know they use the term note and not dollars in the bank? It makes sense though to me because in my legal background, we use the terms promissory note to represent money.  I found that interesting but apparently my boys didn't.  Whatever.

They were asking more questions like what is the bank's greatest national security threat and did they have bullet proof glass. The boys apparently have seen too many movies and are thinking the bank is prepared for a "bank heist".  They assured them that a bank heist was not on their list of threats but that their greatest threat is a terrorist attack. A blow to the bank would threaten the stability of the economy.

The room pictured above is used by consulates or other important heads of companies as they meet together to discuss their interest in either doing business in the area or if they are out of country, they may want to make connections here in the states. So the room serves as a place to work and collaborate.

I never knew that the Federal Reserve Bank did so much more than cover loans for banks. 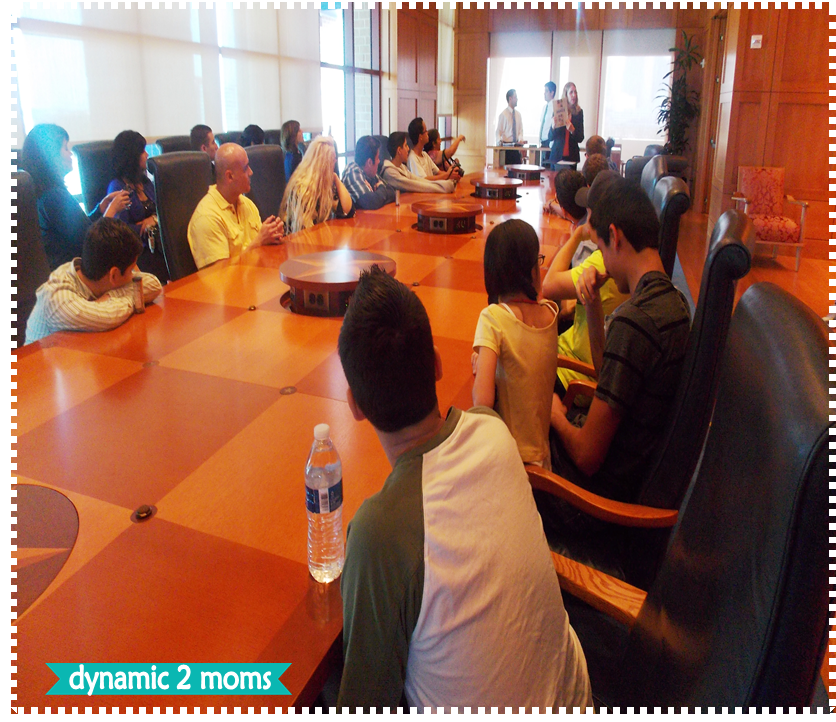 Then we were taken to another large conference room where consulates and businessmen meet too. We all got to sit around the table and thankfully Tiny asked what the button was under the table as he thought about pushing it. It was a panic button. If it was pushed, security would be on us in few seconds. Did I mention this field trip is probably best for older kids? 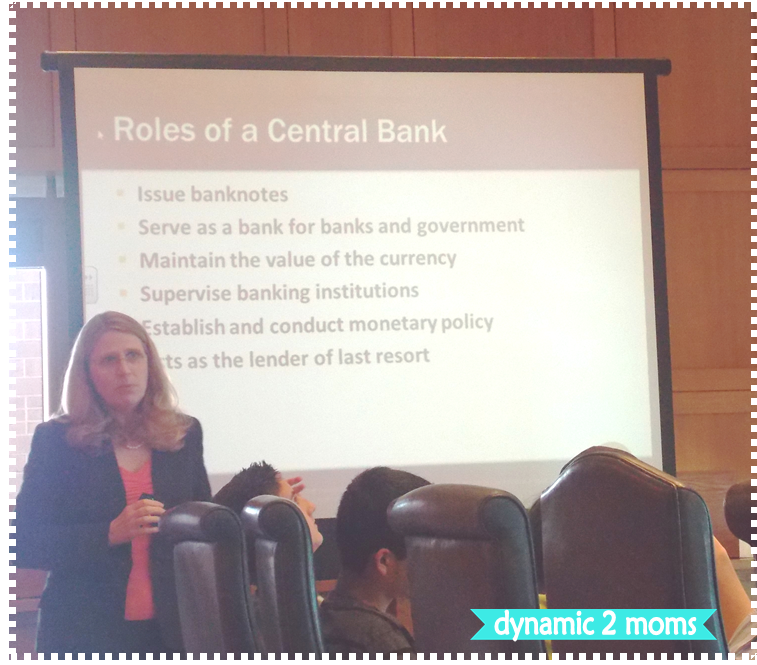 We were shown a short film presentation on what the Federal Reserve Bank actually does because a  lot of us were still foggy about it. Did you know that the employees are not federal? It was set up by Congress in 1913 but the employees are bank employees even though it's overseen by Congress. It is quasi-governmental and tax dollars do not pay for them. Instead, they return money to the treasury. 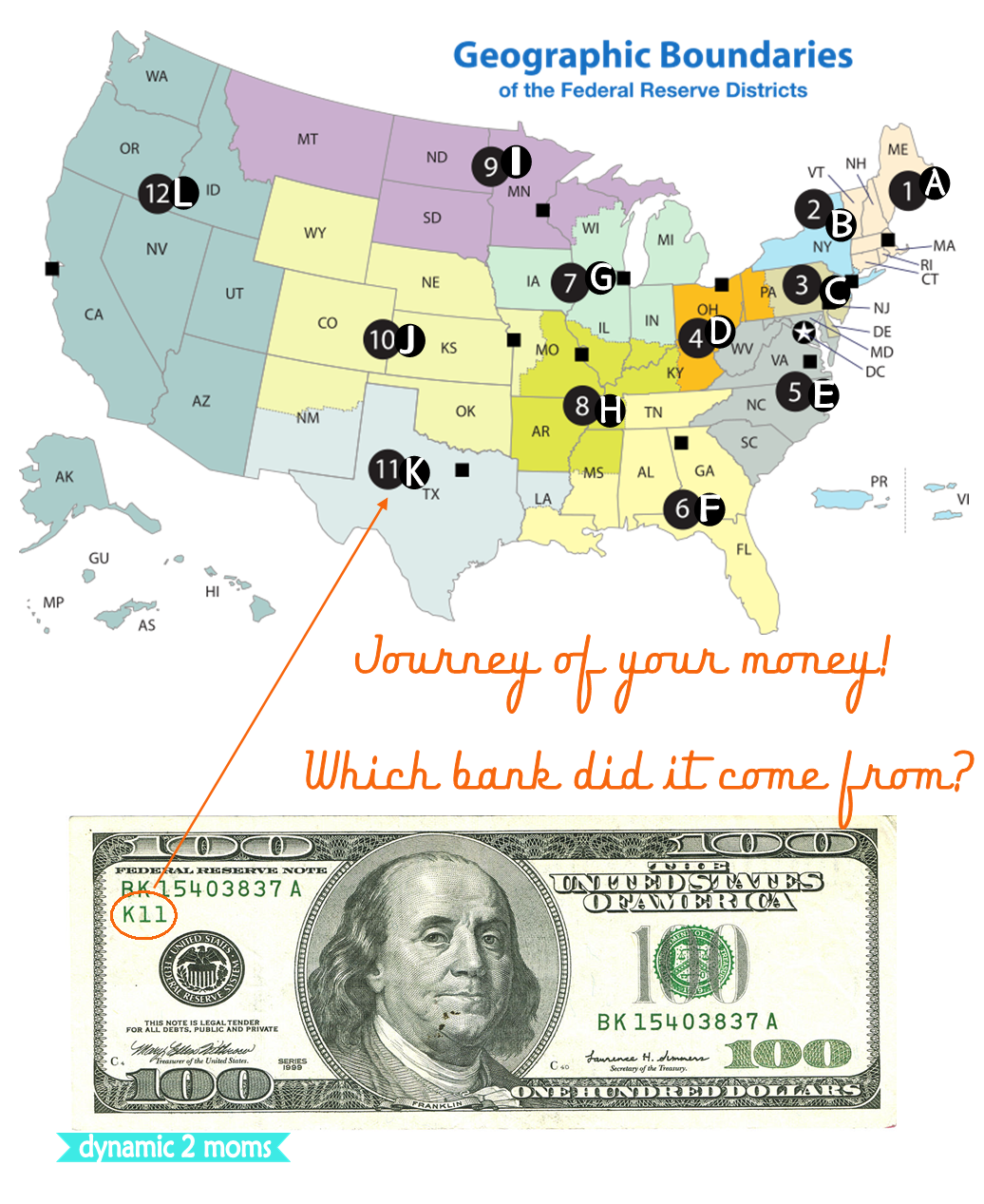 One cool thing the kids enjoyed learning is where their money traveled from. Looking at this bill above and the left is the alphabet letter and number of the Federal Reserve Bank that put it into operation. Try it with your kids. Take out some money and find out which branch it started out at and how think how did it get to you. 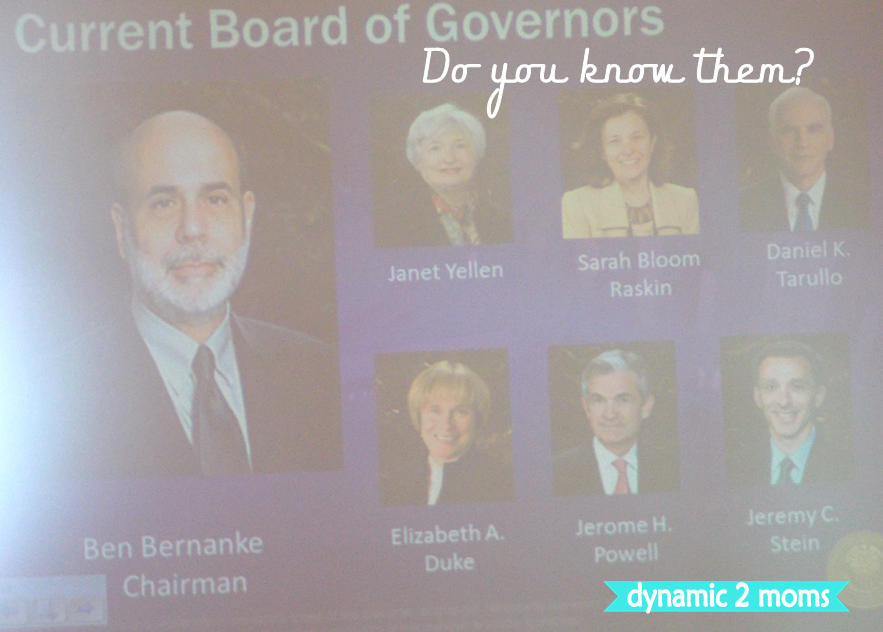 I bet not many people know who these folks are either but they make all the decisions for the economy, including setting interest rates here in the United States. 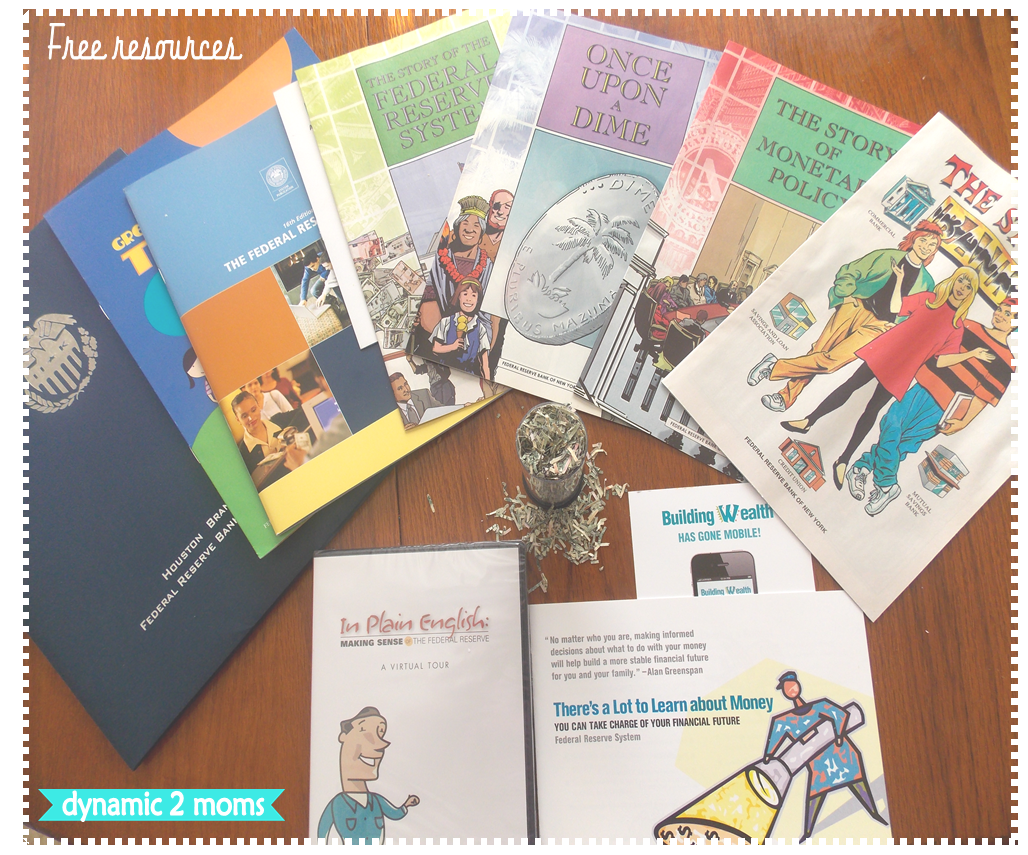 Lastly, we were given more free resources and packages than we could hardly carry out of the building. Guess what? You can order them for free too. (Click Classroom Resources and Order Form for the blank form) I am telling you, there are enough free resources here for your home or classroom that you could teach about economics, the federal government, monetary policy and threats to security that would keep you busy for weeks. 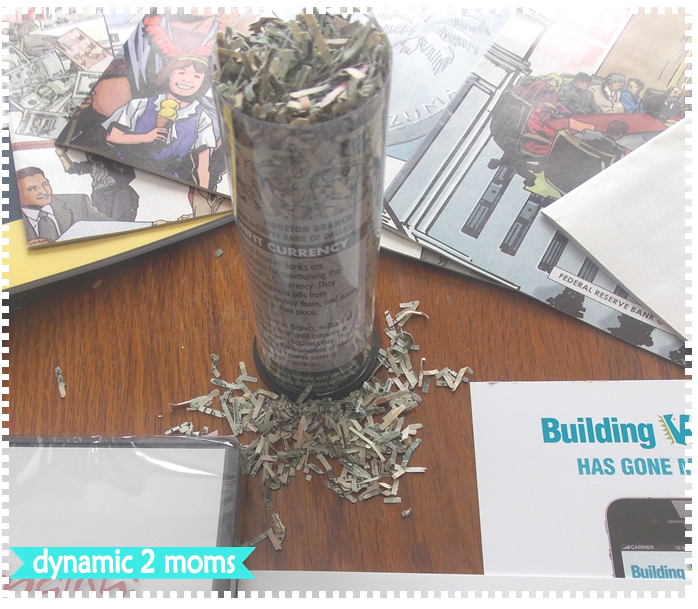 A nice surprise to round out our experience was when everybody received a tube of old shredded money.

We especially loved learning how to tell apart counterfeits or fakes from good money.  When they told us that the counterfeit money was sent to the Secret Service, the boys decided that may be another topic they have to read about. I wish I could have taken more photographs inside because it was such an enriching and rewarding field trip. Learning about the money operation and function of the Federal Reserve Bank that serves as a quasi-governmental agency was so much more than I knew.

Another idea for a field trip on this topic besides visiting any federal office is to visit the U.S. Bureau of Engraving & Printing. There are only 2  locations though in the United States. One is in  Washington, D.C. and the other one is here in Texas in Forth Worth. It is a great place for a field trip if you are ever close.

I have the second day in my series 5 Days of A Fresh Start Homeschooling Mid-Year & Thriving - Day 2: Mission Accomplished. And oh yes, a brand new form for our curriculum planner too! 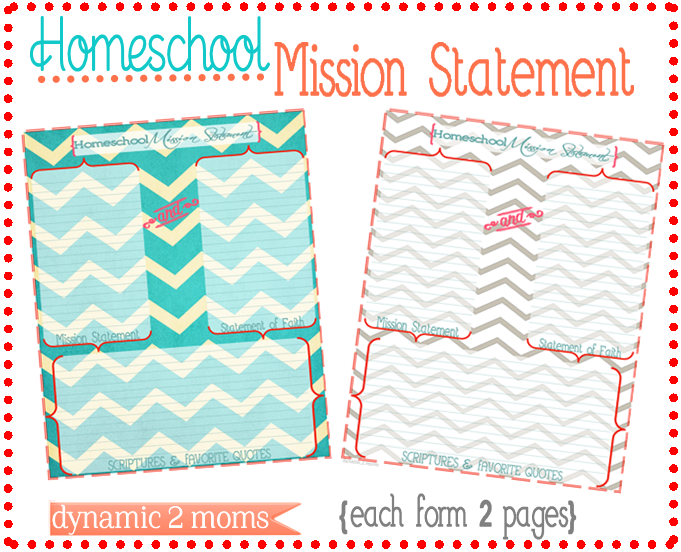