Also, just so you are clear, though I know you probably are, my name is not Technical Tina. I always say when you homeschool you take on projects you yourself would never ever do and well with boys, I have no choice but to learn about terminals, circuitry, diodes and geodes (oh wait that has to with rocks), capacitors and all of those thing-a-ma-jigs and doodads.

So after we studied about spying and the importance of communication to the FBI we found this next idea for a project from the Spy Museum. The boys built an oatmeal box crystal radio like the one below from the midnight science website. Though none of my sons did Boy Scouts, I am thinking they probably still build it.

It is a handmade radio that can receive am radio stations. This made for some great discussions of how this works without a power source. I think we call that physics. Then again it does have a power source which is the antenna.

I have to admit after doing this alongside the boys we all had many questions.

The website was full of great beginners tips which I appreciated. For example, I like this very simple explanation about a crystal radio: a crystal radio is the simplest kind of radio. Most radios you buy use complicated electronics to make a strong copy of the sound. A crystal radio is a simple kind of radio that just picks up the wave and changes it straight into sound. It does not use separate power or batteries to make a stronger copy of the sound. It gets all of its power only from the radio wave. 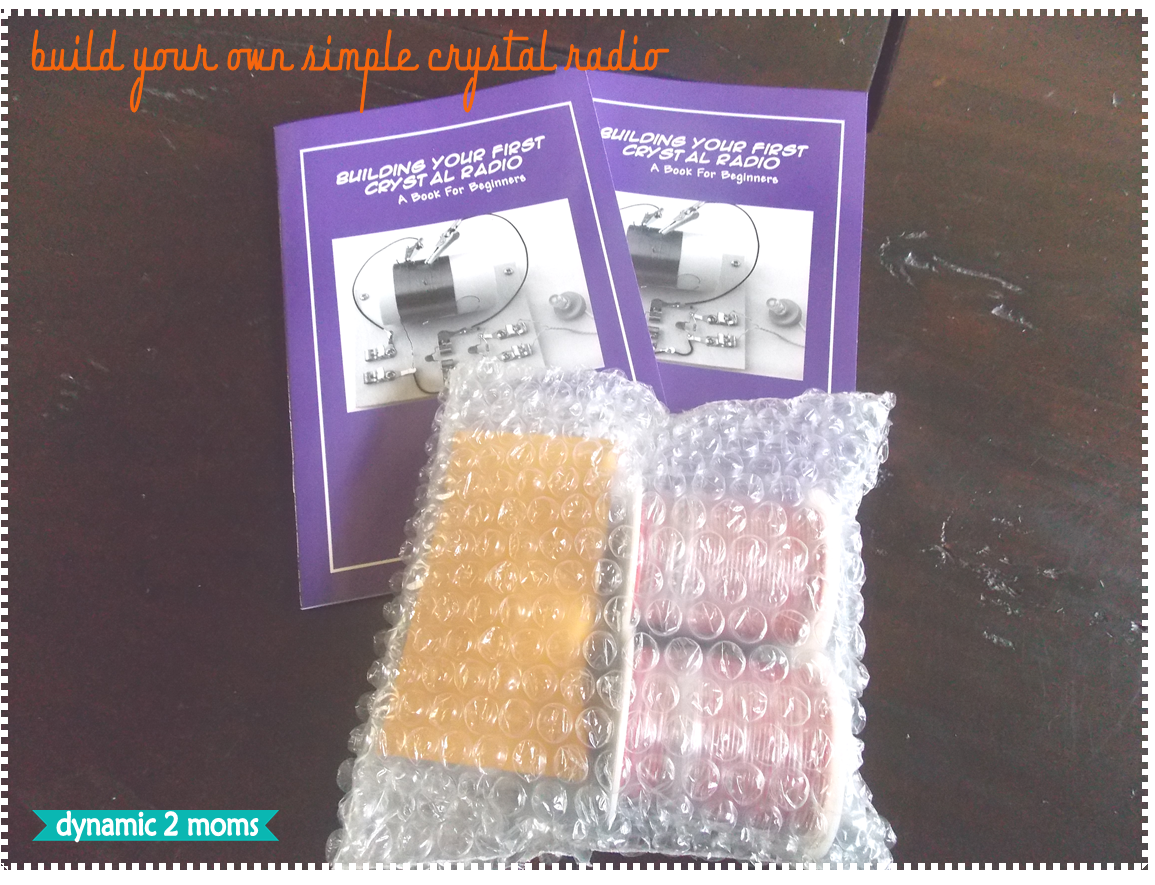 So I got brave and ordered the simple crystal radio from the website and the book for beginners for me them. 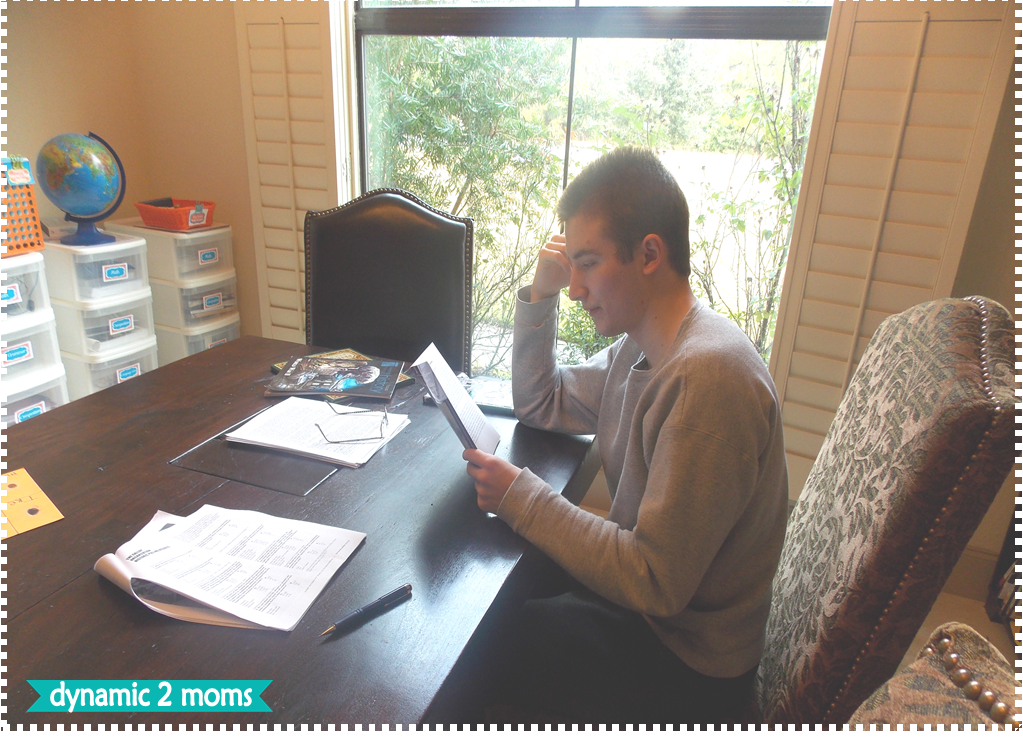 Then of course like every wonderful male species Senior in a homeschool family, he thinks our project  needs to be much bigger. So Mr. Senior 2013 found another set of instructions on the site that uses a bigger container, a Quaker oatmeal box. 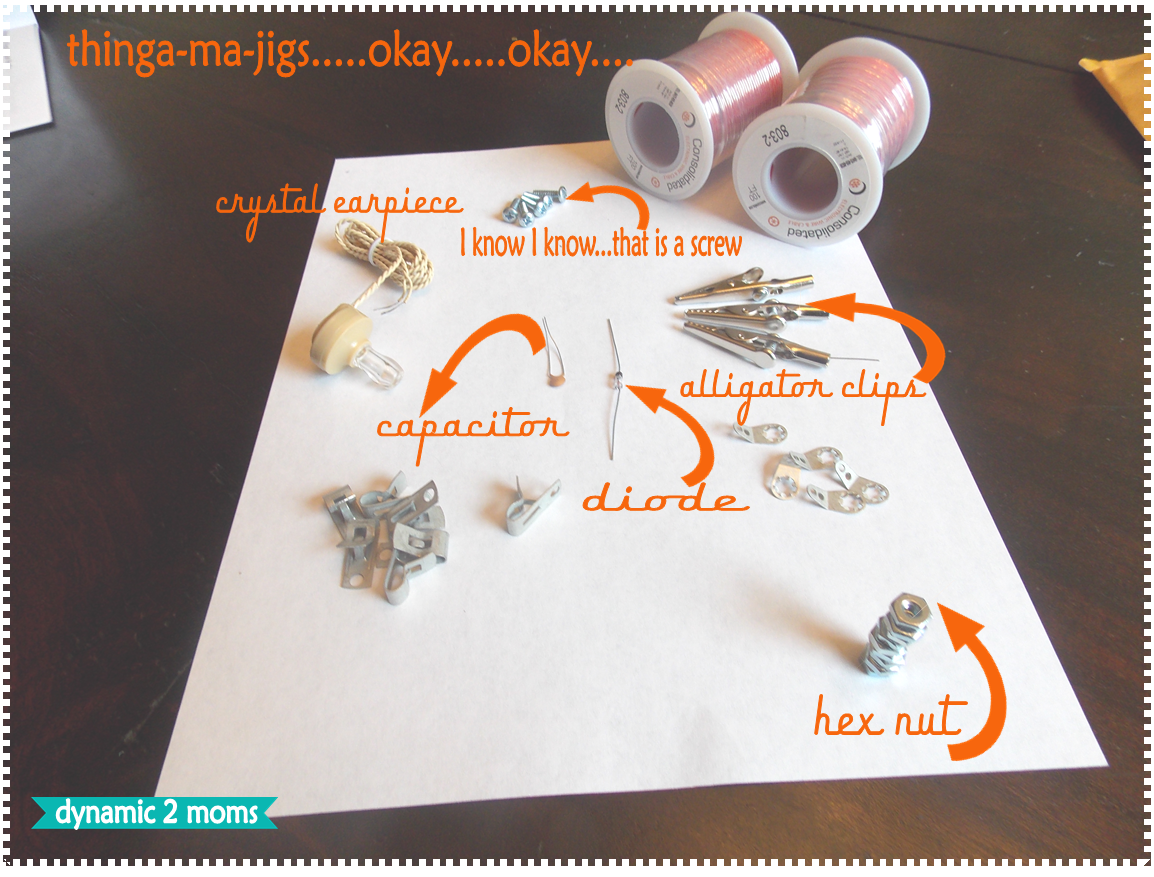 Well, not wanting to waste the few parts I already got, we had a quick a lesson on naming all those little things. 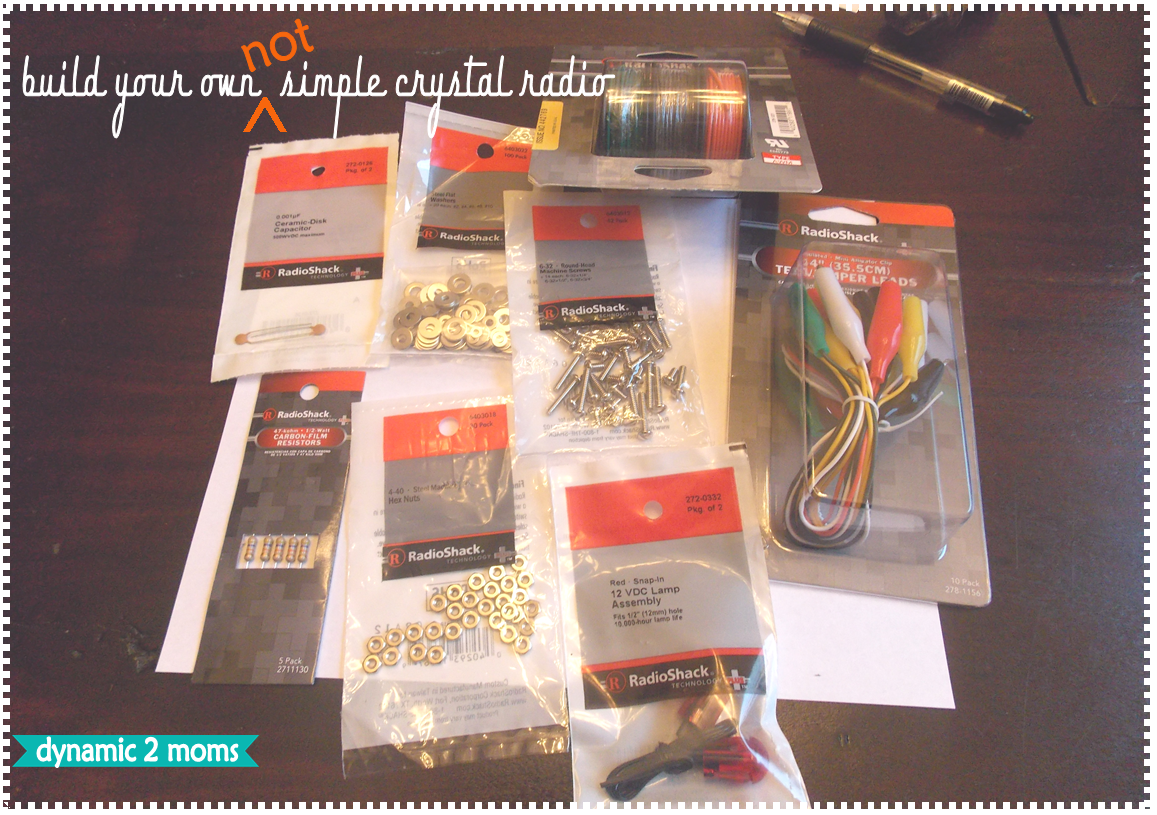 Then dad gets involved and picks up way more crystal radio pieces. It was interesting to read though this hobby started in the 1920's and then it was revived in the 1950's. It was a hobby for father and sons to share at that time. I ask my dad if he remembered them and he had heard about them from his father. 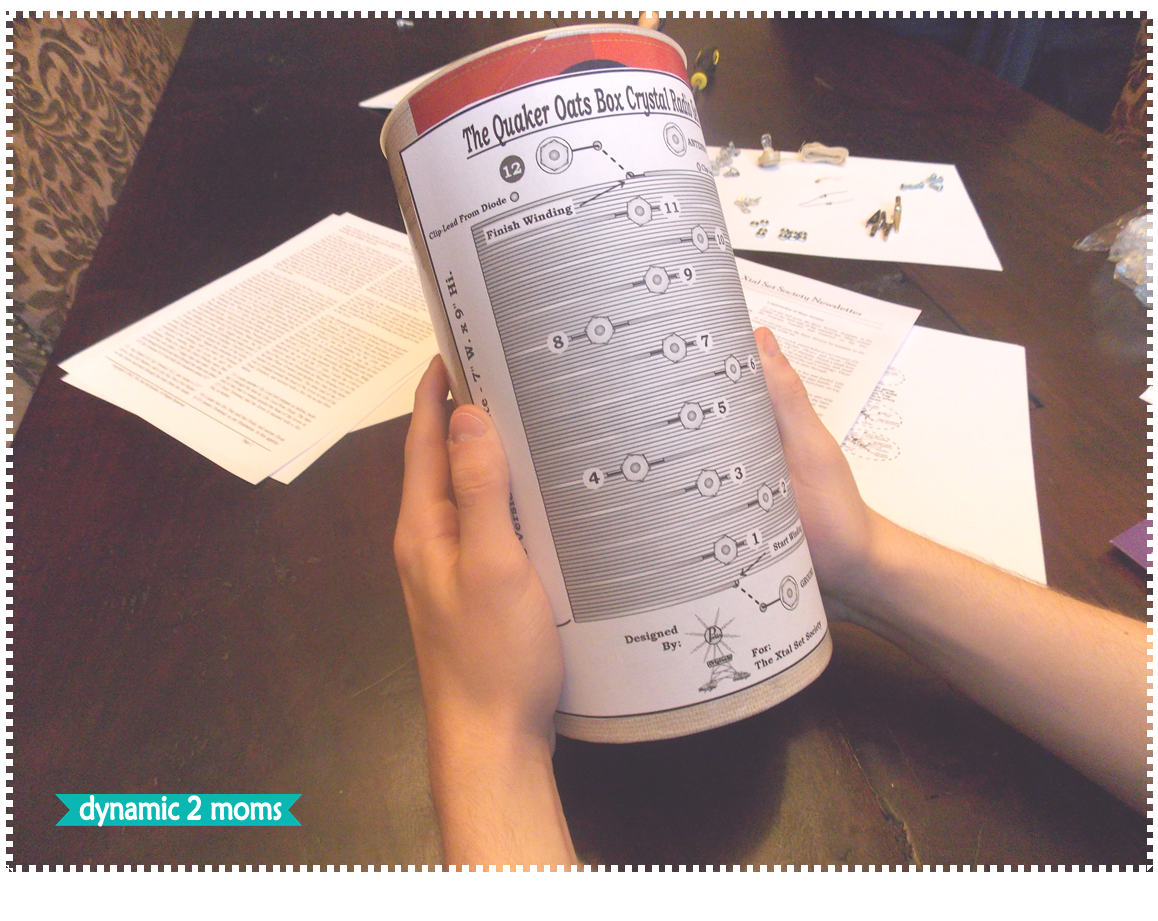 The free instructions, download and material list which I linked at the bottom came with a template to glue on the container. That's it, make it easy for us. 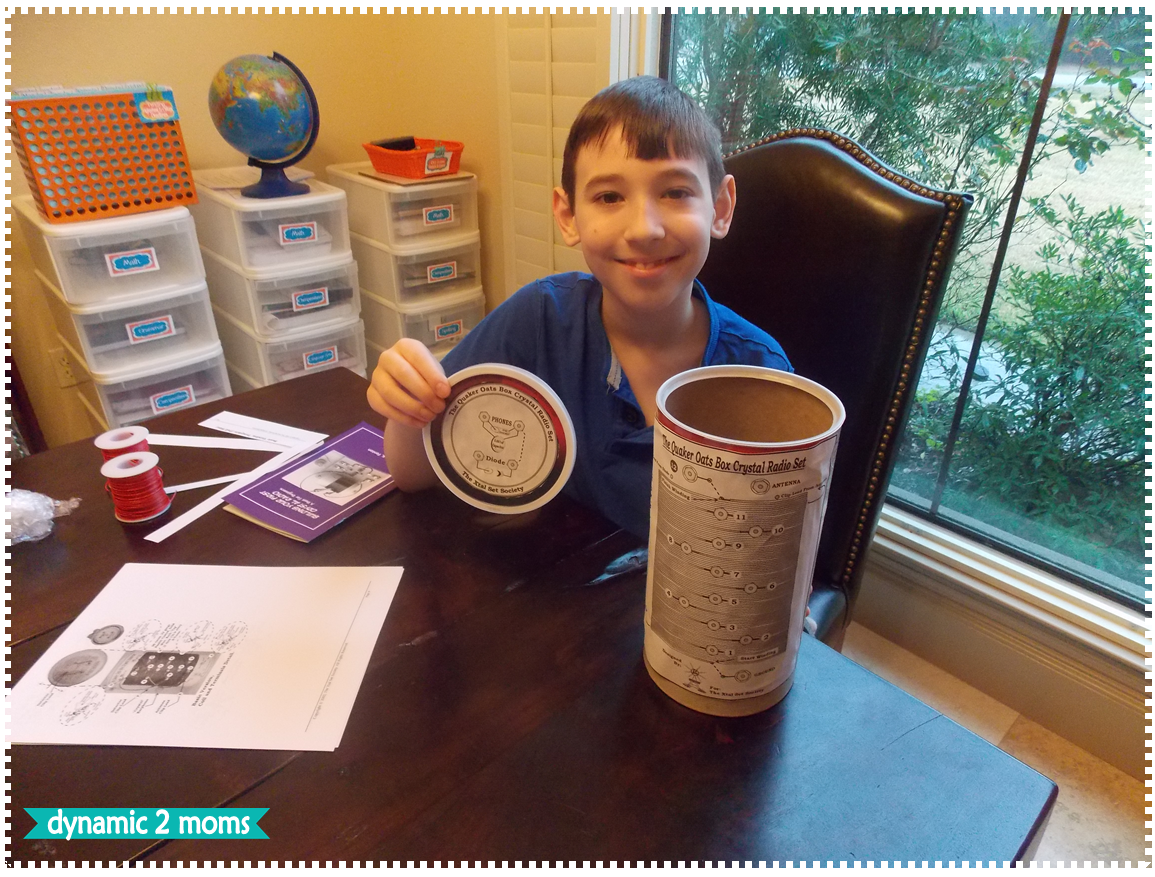 Glue the template on the container and lid and start following the directions. 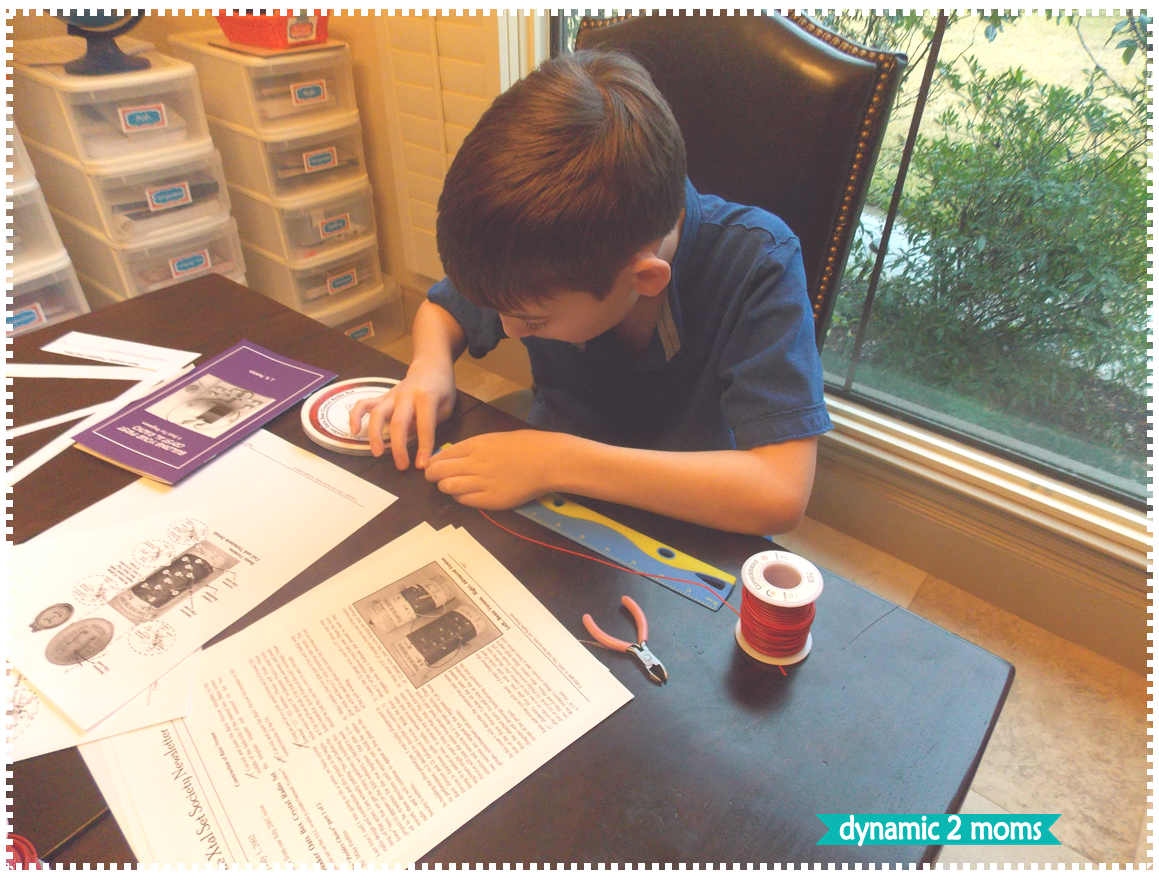 Poor sweet little boy. At least he still does not mind using momma's tools that are pink. 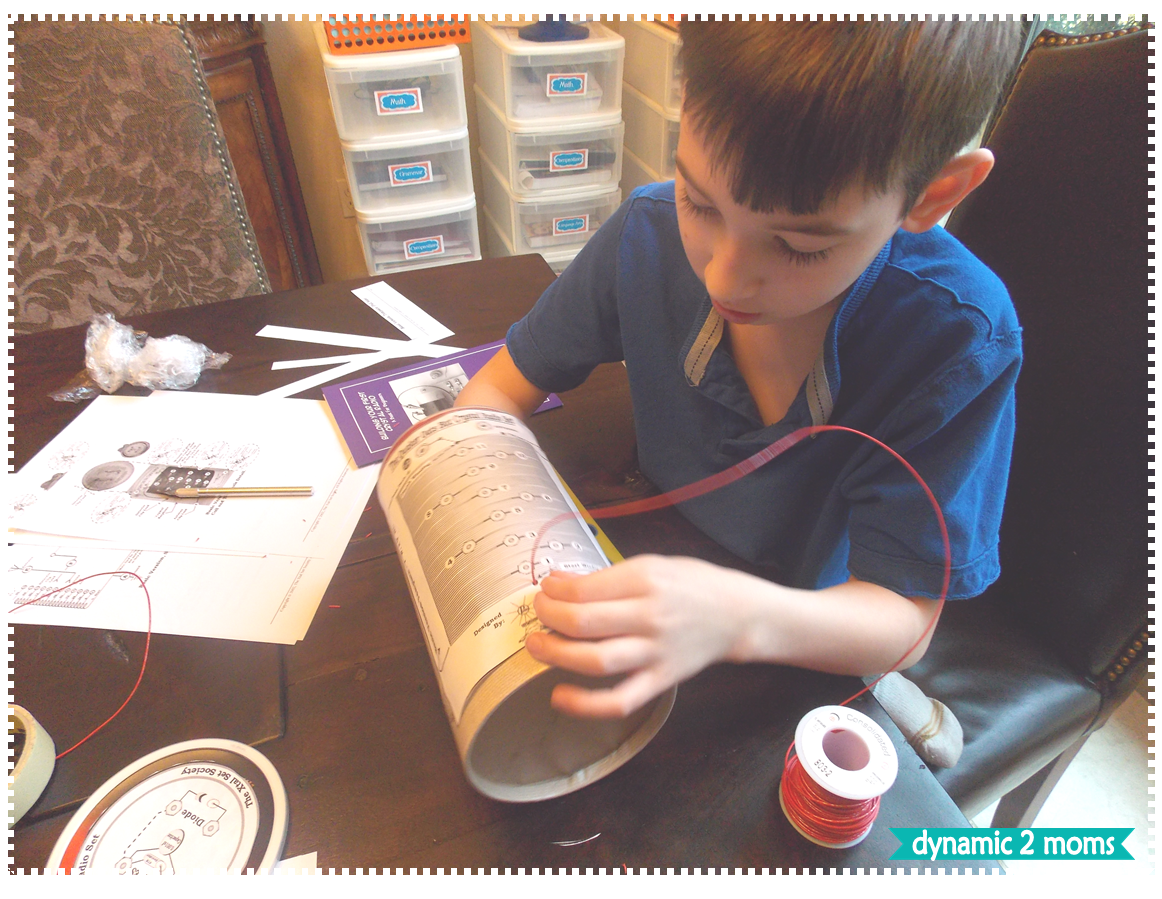 We used a craft knife to strip the ends of the wire and started winding it around the box... 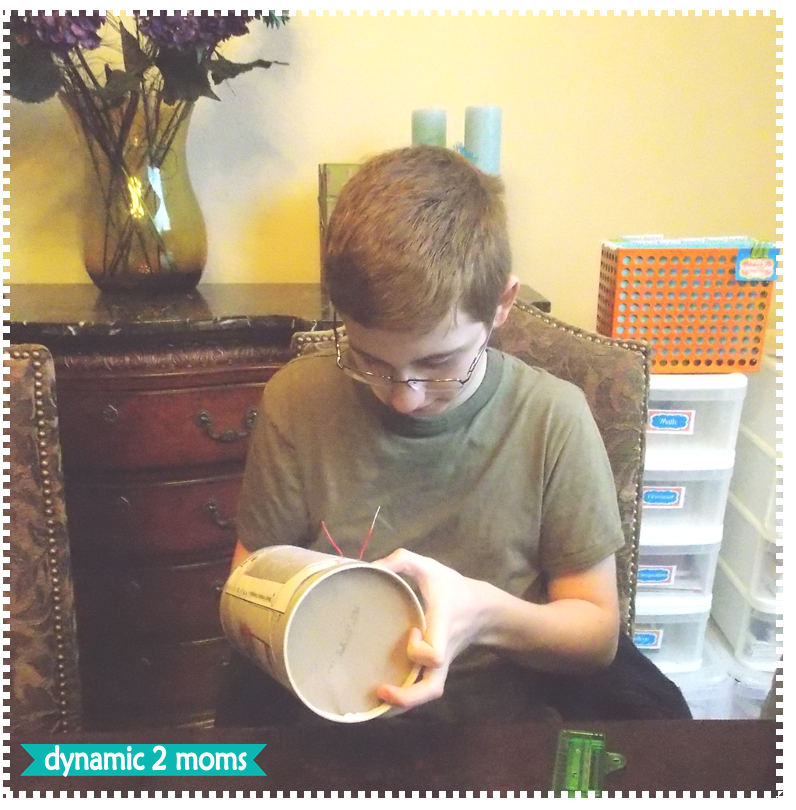 Then get another brother to jump in and help some. 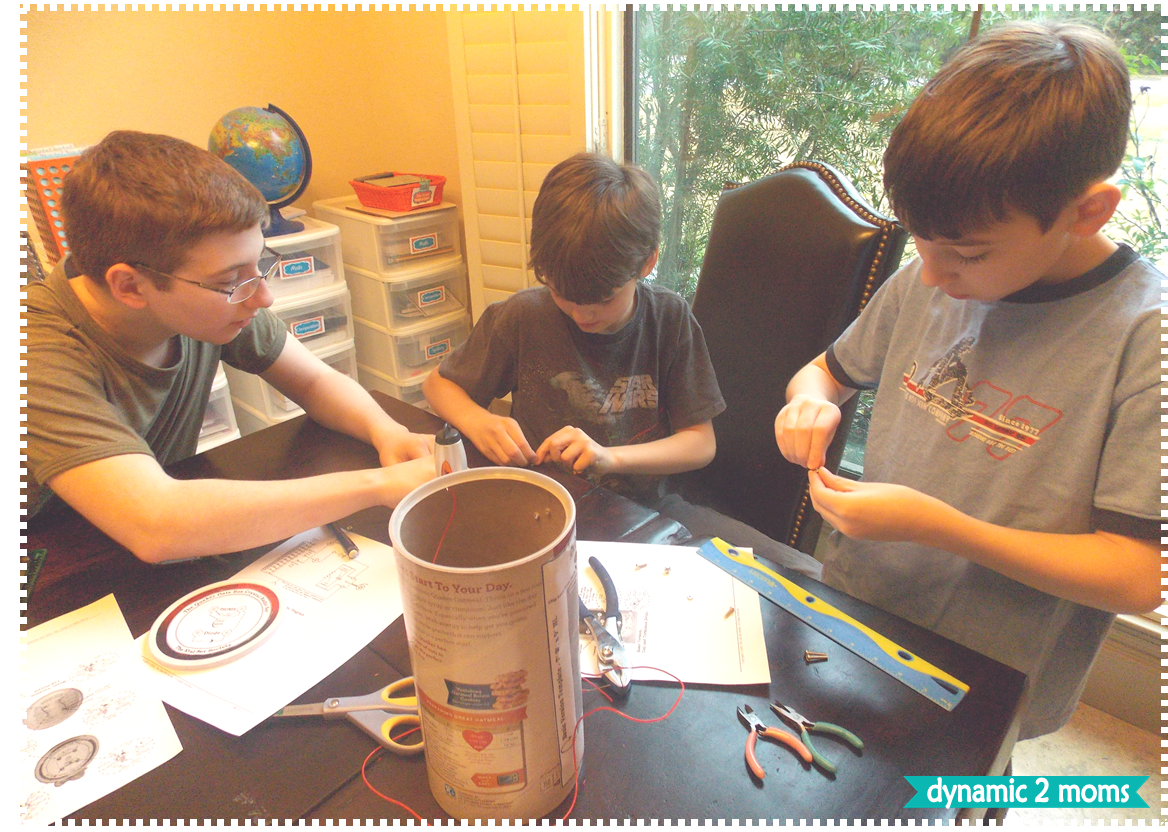 Oh, and yes, have over another friend of the male species so that my house is only full of them now.. 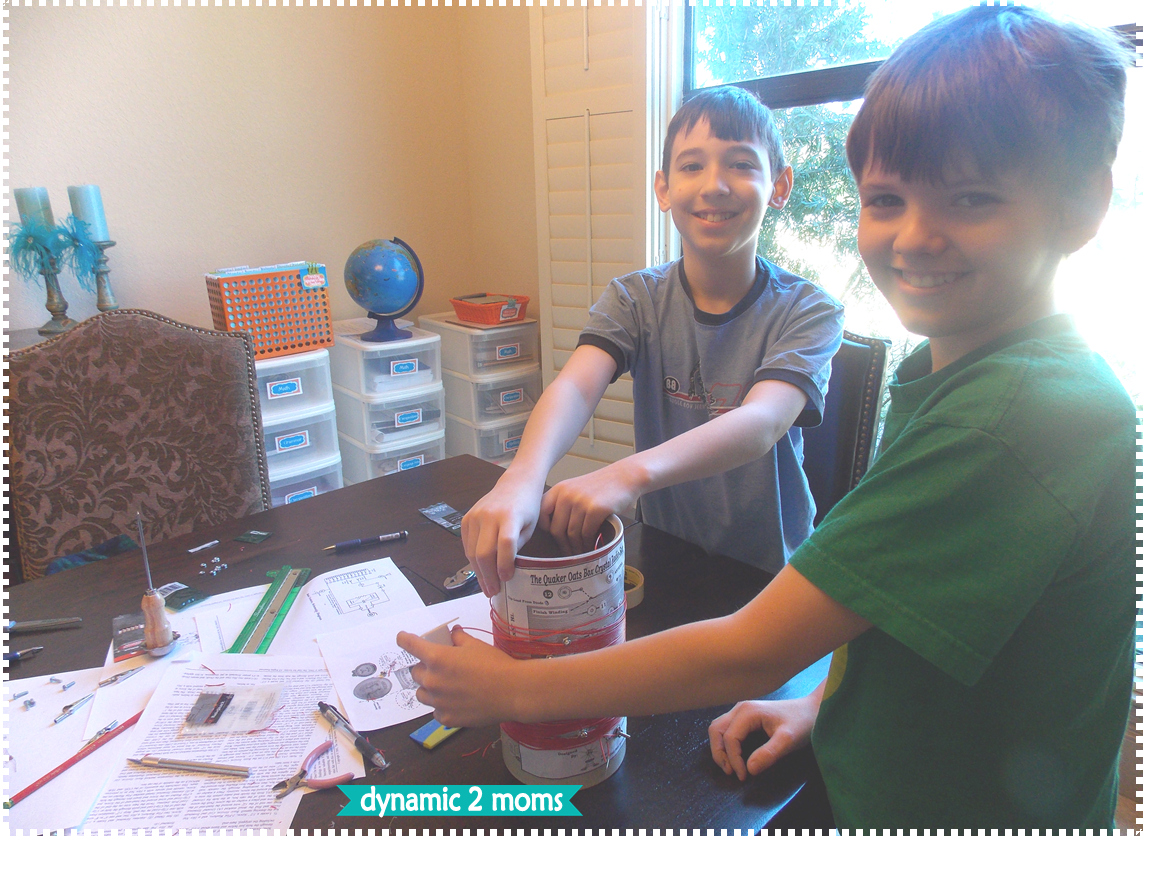 Let him work on it some too. They had to make a tap terminal every 8 winds of the wire. Strip the ends and wrap around the screws to make the taps. 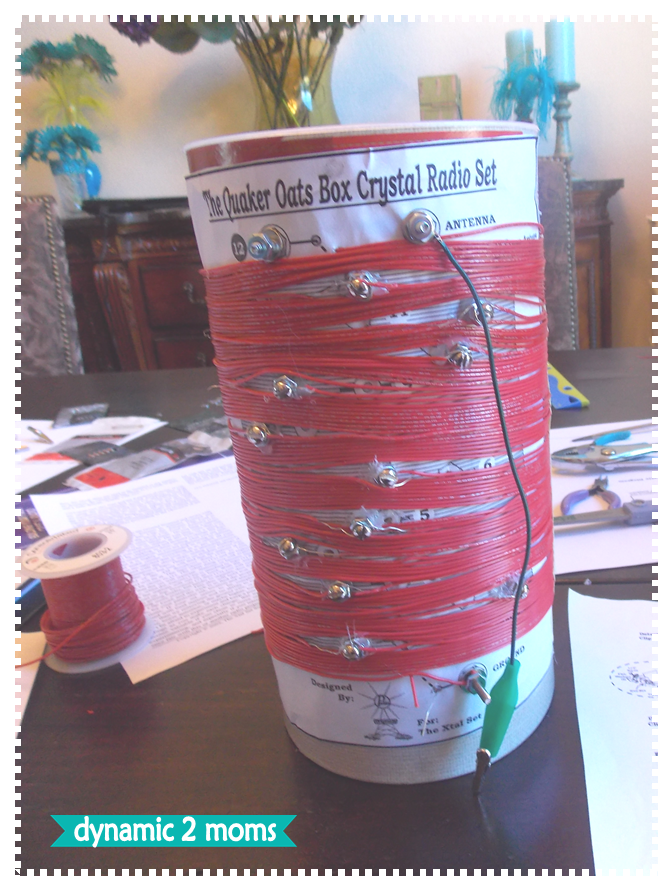 Almost done, then we connected the earpiece and the detector clip. The sounds we got were so muffled but were excited to just hear the sounds. 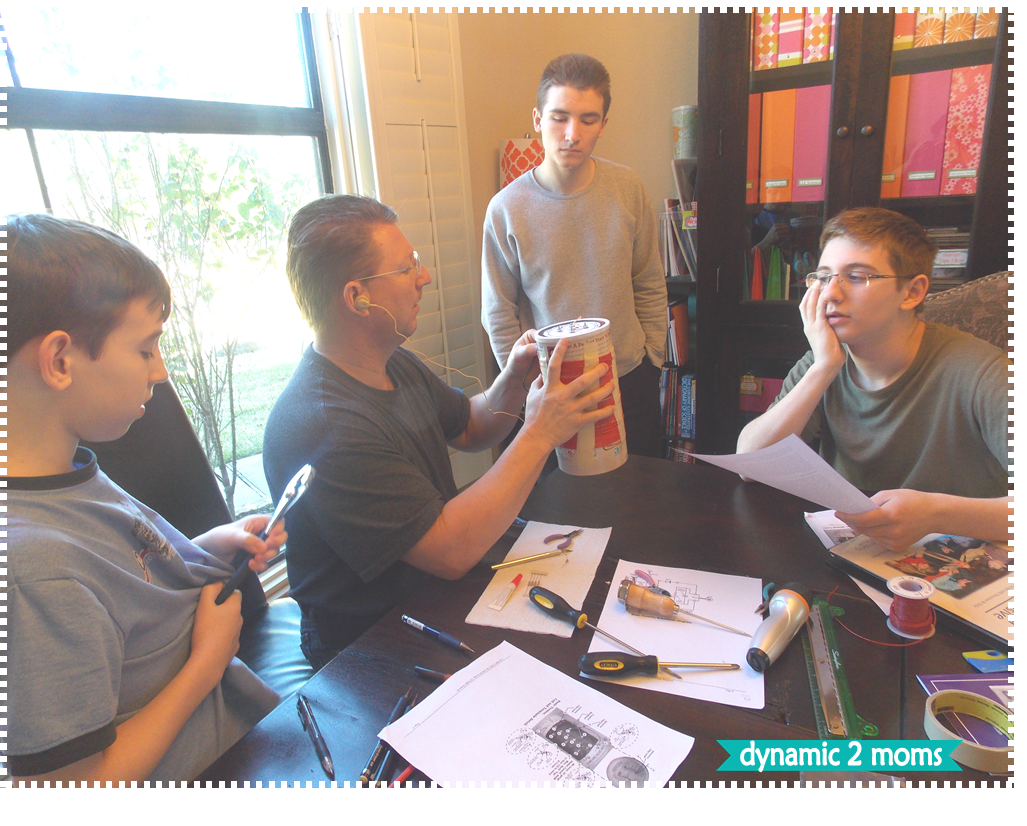 Dad to the rescue to check our "connections".  We ended up getting only like one local am station but there are  some 5000 stations.  You can grab a list of the am stations here.  Too, we can add another antenna on this and will be taking the radio with us as we drive out more to the rural areas.

I survived this project and actually learned a thing or two in the process. I just hate to sound so cliche but it really was a lot of fun and we still have it to play with for later.

Here are the FBI Links we used and liked:

Also, one more thing for you. I have one more cover choice for a lapbook or for decorating any page for the younger guys. Cut out the pieces and place on the outside of your lapbook flaps or use on your notebooking page. 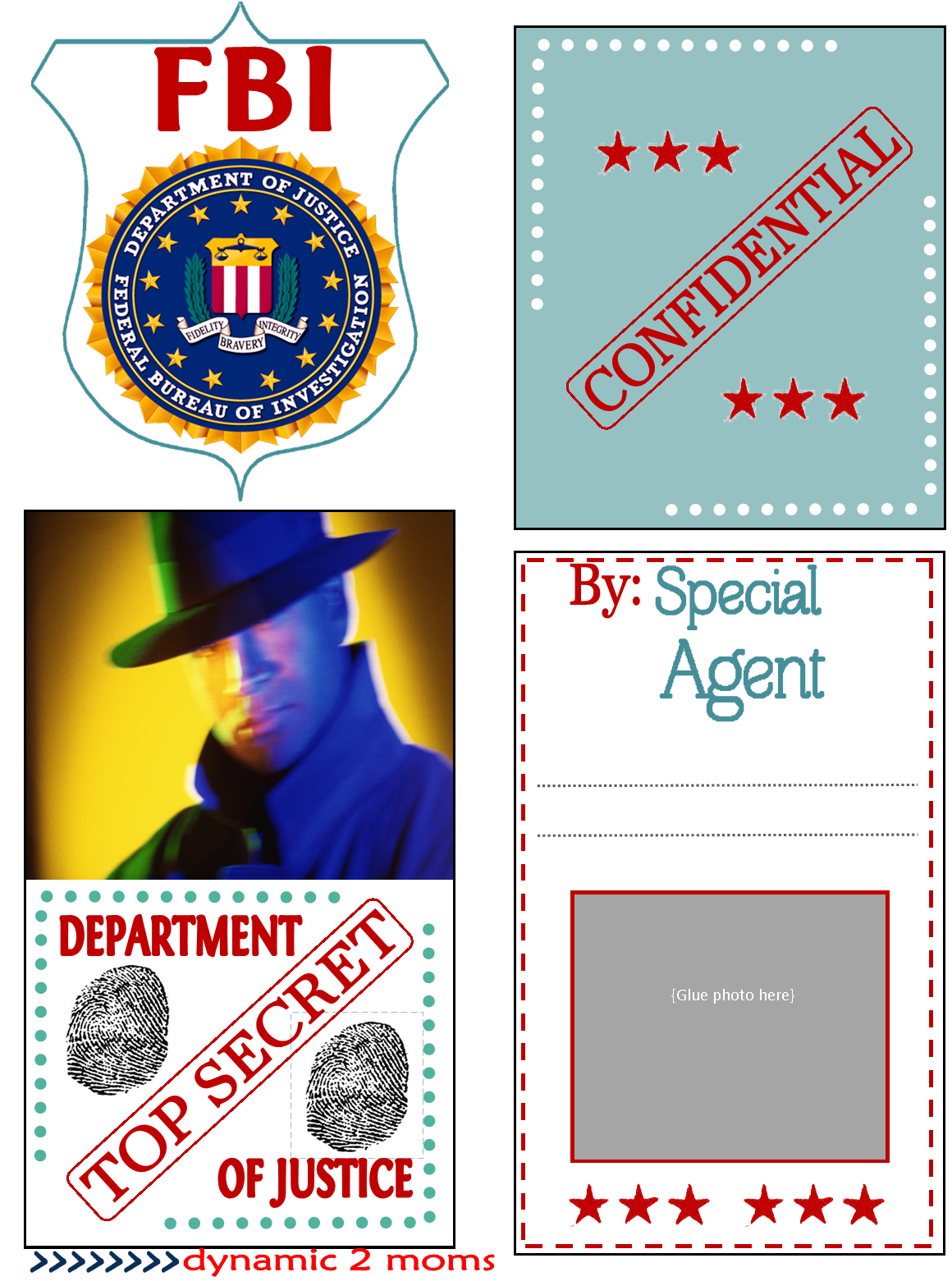 While I was at it, I rounded up a few more resources for you too that would make this unit fun for the younger kids. 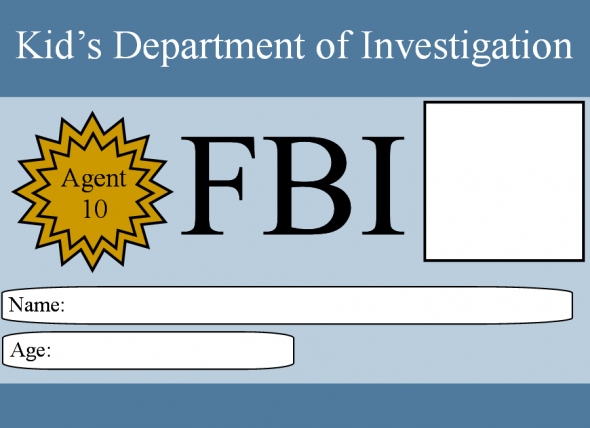 This page has some free printable IDs. Click here to go there. 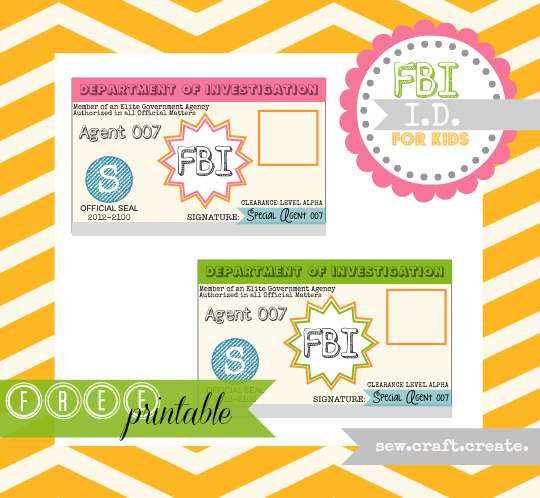 Enjoy this unit, the lapbook and this newest cover. If you are new here, you can grab the FBI lapbook that I just released this week here. 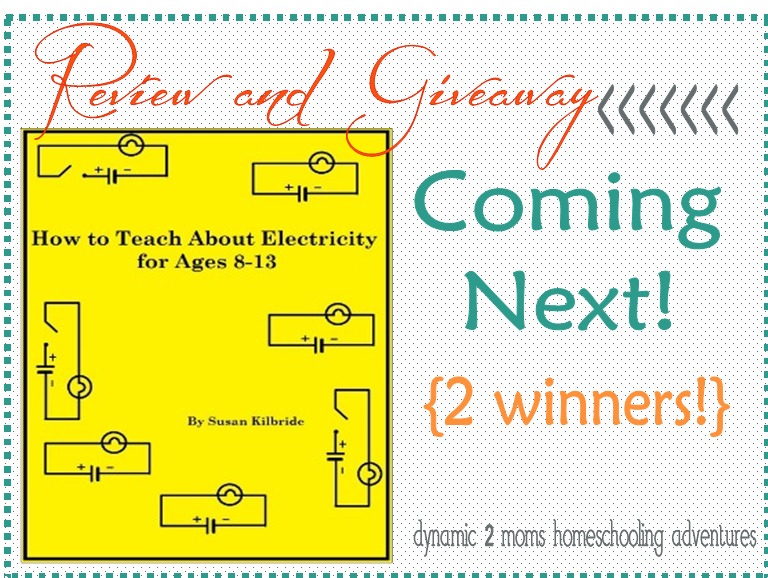 Because I have so many of those doodads left over after this project, it just seemed natural to accept a review on a mini Kindle eBook titled How to Teach About Electricity for Ages 8-13 by Susan Kilbride. So next I have a review and giveaway coming up!

Hugs and love ya, not technical