Like I mentioned earlier in the week, I have had a case of the sizzle butt lately. It is the time of the year and I heart fall weather. Too, I wanted to share another piece of news with you. Shortly, I will be added to the TOS {The Old Schoolhouse} Review Crew.

Now I can add to my curriculum craze under the guise I will be doing curriculum product reviews. It sounds so much better saying I love to blog about homeschooling products. Be sure to check out the website. 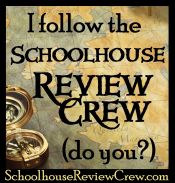 On to our newest unit study, the FBI. I knew the boys really are soaking this one up so I am not sure how long we will be on it. I literally had to stay MOVE ON when we covered the Amazon, War Between the States and a few others. This is starting out the same way. {love it} 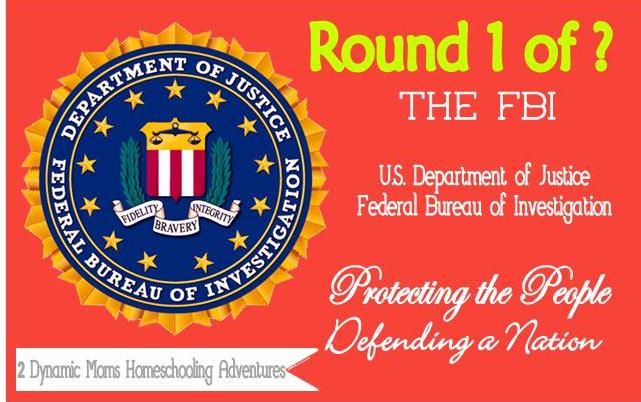 This week the boys have been reading some of the resources I have had in the house and a few we bought. 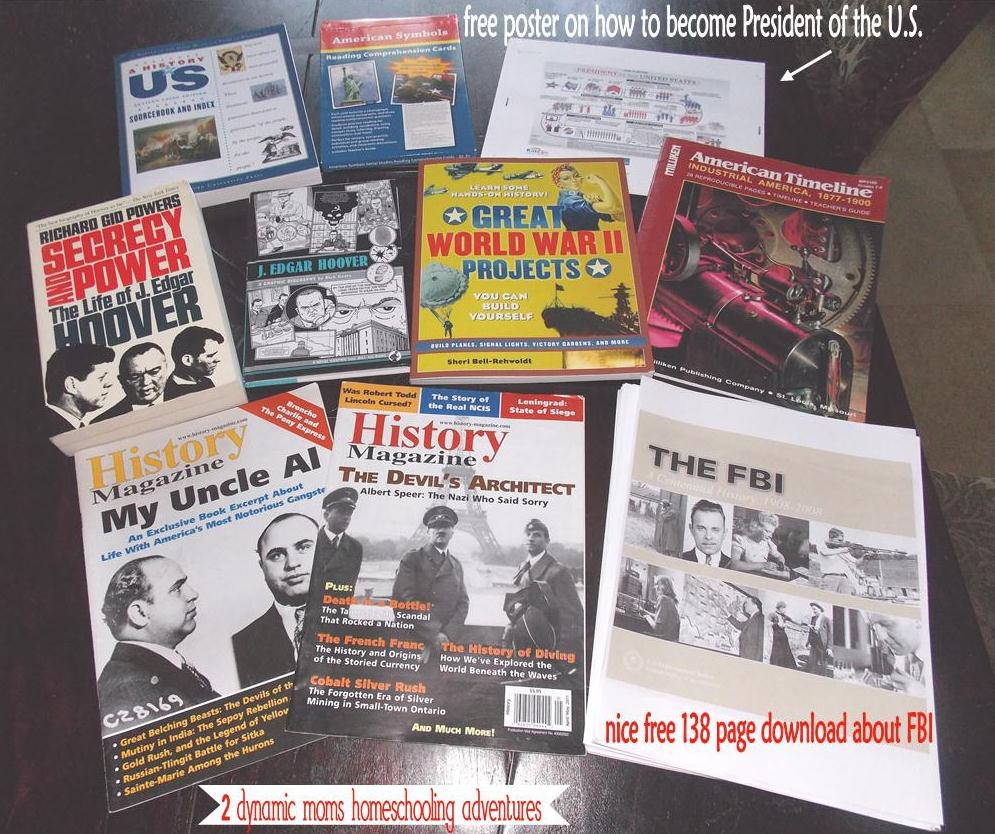 The best resource by far has been the free 138 page free download provided on the FBI site.  I was pleasantly surprised because this is not a topic you will find a lot of reference material on for obvious reasons of national security. So I was happy that the pdf covers what we really want to know which is the history. . Click here to grab it if you want it.

My focus for the unit is to tie in more American history and modern history. We have come up with so many subtopics like Model T cars, science of finger printing, spy games, defining terms like Marxism and capitalism, two World Wars, Red Scare and the effects of prejudice and more. I also want to be sure I cover subtopics for Tiny too like the presidents. He wasn't as thrilled with this unit study topic but again Mr. Senior 2013 is getting final say this year. Tiny is coming around.

One significant point about J. Edgar Hoover, who turned the FBI into a household name, was that he served under 8 presidents. I took advantage of using this free poster on how to become President of the United States to talk to Tiny and to tie that in with our study. 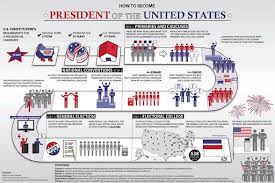 The free poster is a nifty find because it keeps the process all simple and clear without going into the complicated electoral college system. Click here to grab the download  in pdf if you missed it on my facebook page.

Also there are so many key figures but we are starting with J. Edgar Hoover who served as Director from 1924 to 1972 or 48 years.

Also, Attorney General Charles J. Bonaparte who is the grandnephew of the French emperor, Bonaparte . He was a civic reformer appointed by President Teddy Roosevelt and served on his cabinet. In a memo dated July 26, 1908 he was quoted as saying "a regular force of special agents" are available to investigate certain cases of the Department of Justice. That was the birth of the FBI.

Special Agent Charles Appel had served as an aviator in World I before joining the bureau in 1924 and he focused investigations based on scientific detection. He sought expert opinions on starting a crime lab. A lab was created and for about a year, Appel was the Bureau's one-man lab. 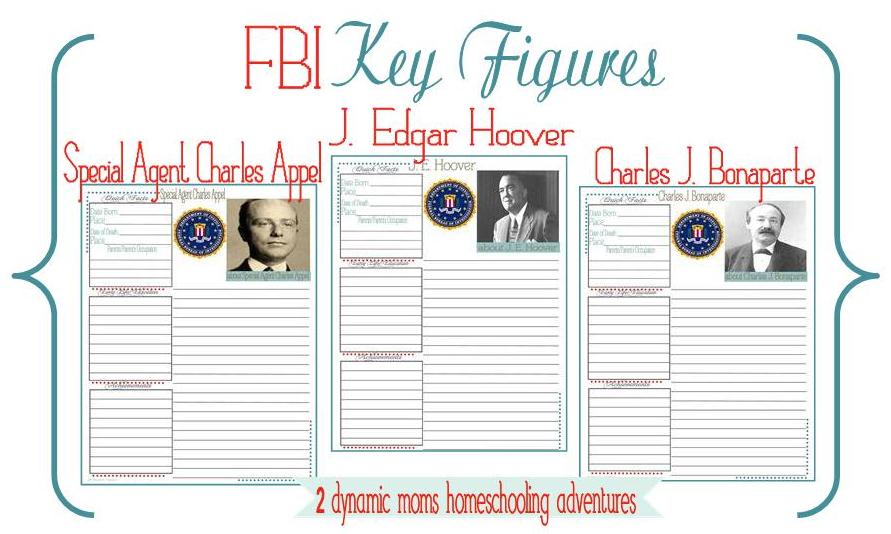 I created 3 pages on key figures to get started on what I think will turn out to be a big unit.  I want you to have some of this before I break from blogging.

Also, we watched a documentary with rapt attention about the FBI by National Geographic. Again, I was pleasantly surprise of how informative that movie was on so many subjects. 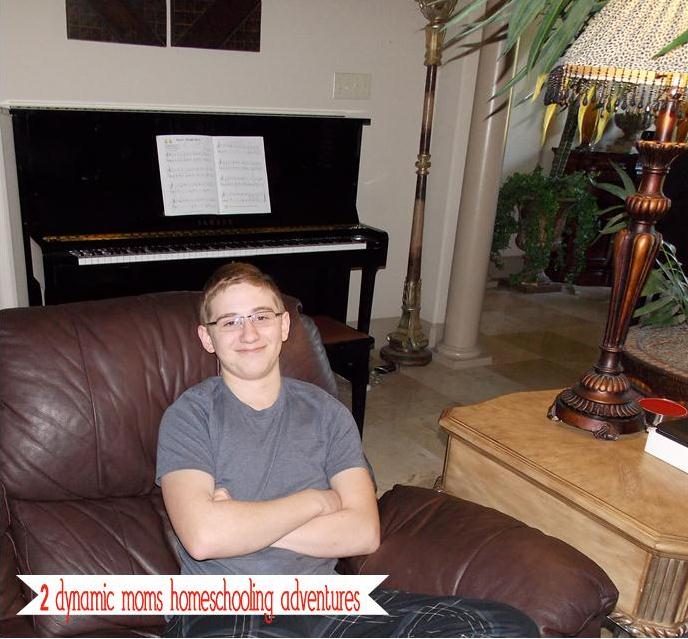 Of course,  Mr. Awesome is up for anything that doesn't involve writing and does involve TV watching.  Netflix is a favorite of mine because it does have so many educational programs on it.  This movie was narrated by Dennis Haysbert whose voice we really like. 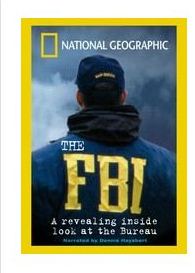 National Geographic: FBI {56 minutes}. " Offering rare footage and interviews with agents, this penetrating documentary offers high-security access behind the scenes at the FBI." 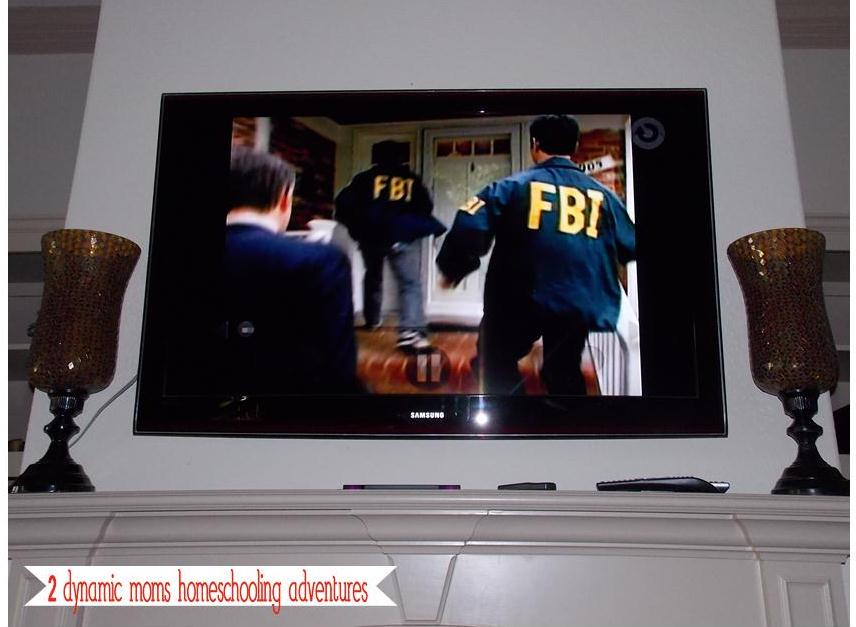 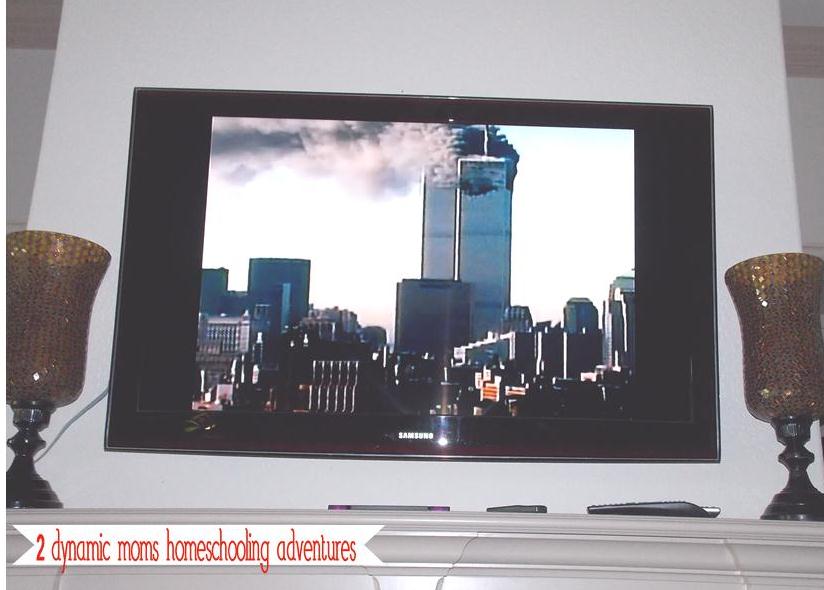 I didn't have Tiny watch all of it because even though we found it extremely informative, it did deal with topics like murder,etc.  That is not really a topic I want my high schoolers on either but they are not as affected and understood the context. Basically you spent a day with the FBI director as he briefed the president and then it would cut away and explain major crime and events down to 2003.

Tiny will focus more on knowing and remembering some of the 8 presidents that J. E. Hoover served under. I included Teddy Roosevelt too in our study because the Bureau viewed him as an advocate of the Progressive Movement. He was a believer in the enforcement of law and it was under his reform driven leadership that the FBI would get its start. {quoted in the FBI download} 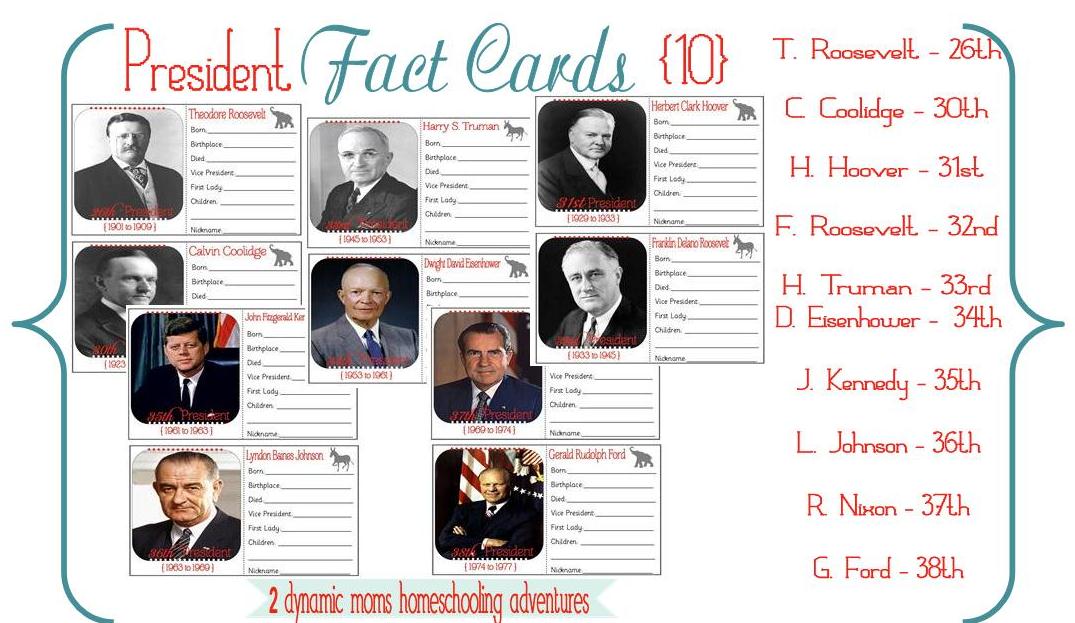 Download all 10 Presidential fact cards here. {fold in half and glue}

I wanted something this time around teaching Tiny that will last and be quick. Teaching the presidents to the older boys took too much writing last time and a flash card style fact card would have been just as effective and more fun. The fact cards have the president's face, years he served and what number he is on the front. On the back, there is a symbol for which party he was part of and a line for born, birthplace, vice president, first lady, children and nickname.

This way you can flip them over and try to guess key facts, put them in  chronological order and even sort by party. It helps to learn to memorize them a few different ways.

Does this mean that the president fact card will be another ongoing project since I started with 10? Shouldn't take long to whip out another 33 or is that 34 fact cards.

I still have printables coming too about facts on the actual FBI and industrial inventions that shaped America during that time and the way the FBI fought mayhem and murder. This unit is such a nice balance of science, history and industrial America.

On to the last thing I wanted t remind you about. Do you have time to vote today for my blog on HSBA? You can vote 1x each day until November 16. Scroll down and look for "Dynamic 2 Moms". Click on the picture to go to the page. You know I don't blog every day so I won't be bugging you but do love you if you voted.

You know I love the humor of Todd Wilson and it has been a while since I shared one of his homeschooling cartoons. 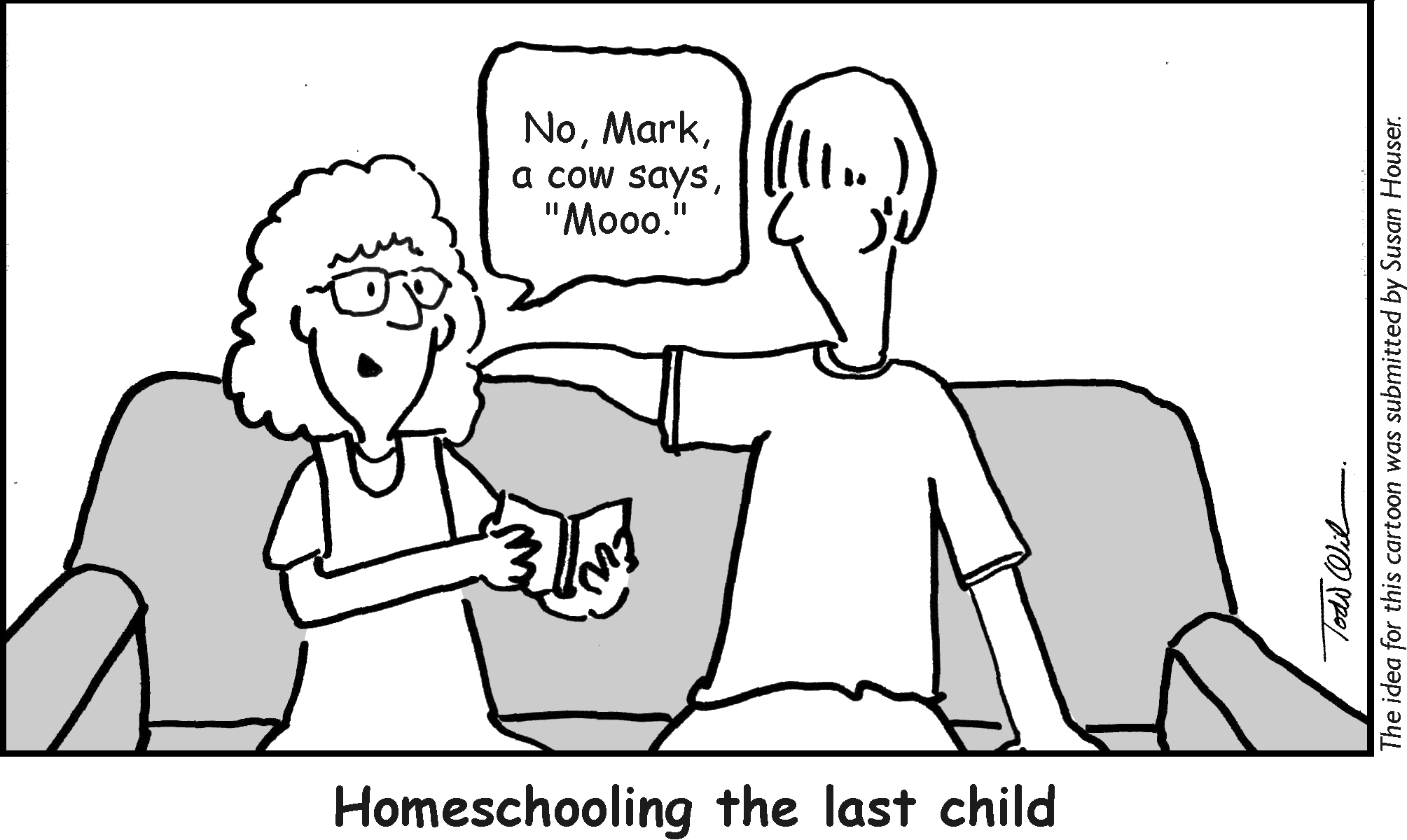 Enjoy the freebies and hugs.

You know I love ya,